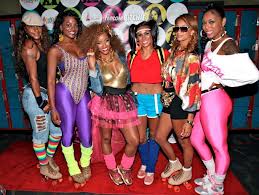 Black men, do you find this attractive?

Black men, do you find this attractive? No

Ratchetness is unattractive to black men. I repeat, ratchetness is unattractive to black men. How many videos we see black women being ratchet? There are so many videos of black women being that are ratchet and frankly enjoy it. There are ghetto ratchets who are wearing inappropriate clothing, there are ratchets black women that are wearing all different colours of weave, they twerk in public and don’t care, show they’re bad behaviour on social media, the list goes on and on and on. And when black men who are think minded look at this, they just turn around and walk off in a instant.

When black men see the ratchetness of black women, these women remind them of their female family members. And as they see this with other black women, they are not goanna deal with that ratchet bullshit. So they decide to date non black women and move away from the scraggle daggles that embrace the ratchetness. But the thing is that these ghetto ratchet black women will lose their heads and go in rage mode when they see black men with non black women and calling them names like nigger, house nigger, coon, sell out, sambo and all that nonsense that comes out of their ratchet mouth.

But black men will give these ghetto scarggle daggles nothing but the logical truth of the bad behaviour of these scragglies. As they do that, these scraggs will go to the simps and use them as attack dogs to come after any black man with has a logical mindset. And you know, the worse thing is that these simps will go and defend these ghetto hoodrats. They will be the enforcers/henchmen for the ghetto ratchet harlots and come after black men who talk about the badness of these ghetto scraggs.

But black men who are SYSBM are willing to take on these simps because they are not afraid to take these simps on who don’t have a brain in their thick skull. And when these simps go to battle with SYSBM, they end up losing and they come back emotionally wounded when they take on SYSBM in the battlefield. These simps don’t know what they are getting themselves into. They are taking on intelligent black men who doesn’t think like them and these simps have nothing but weak logic.

As ask they are defending these good for nothing ghetto scarggles, these hoodrats are chasing after the thug, the criminal, the worthless man, the hopeless man and the unproductive man. The men like Colt Five Rounds, 357 Jimmy, Machete Man Briggy, Knife man Priest, Corner Boy Ronney, Rum Smuggler Don, Thick Dick Tyrone and Fuck All Night Freed. The simps will have no chance to get one of these scarggle daggles that they love and honour. They will struggle to get one.

Black men or thinking black men are not attractive to ratchet women. They stay away from that fuckery. Because the problems it will bring for them if they start a relationship with these scraggly women. And these hoodrats don’t mind causing madness towards but these thinking black men will not take shit from these ratchet women. Listen here, it I was with one of these scraggles, you think I’m goanna take any crap from them? You must be out of your mind!

One thought on “Ratchetness Is Unattractive To Black Men”